Before we start I would like to say that I love Rob Zombie and I don’t hate any of his movies. This is just my opinion from 1-7

Plot: “The murderous, backwoods Firefly family take to the road to escape a vengeful police force which is not afraid of being as ruthless as their target.”  This is my personal favortie. I think the movie was all around amazing and I think the movie has a PERFECT ending. If you’re sick in the head you’ll love it too.

Plot: “After being committed for 17 years, Michael Myers, now a grown man and still very dangerous, escapes from the mental institution (where he was committed as a 10 year old) and he immediately returns to Haddonfield, where he wants to find his baby sister, Laurie. Anyone who crosses his path is in mortal danger.” This remake of John Carpenter’s “Halloween” I think he nailed. The back story and seeing Michael as a kid was the best part for me. He truly grew up in an awful family. Can you blame him for being how he is? 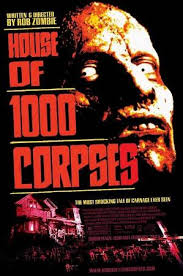 Plot: “Two teenage couples traveling across the backwoods of Texas searching for urban legends of murder end up as prisoners of a bizarre and sadistic backwater family of serial killers” This is where he will suck you in and want more. The movie that makes you wonder if there’s people out there as messed up as in the film. Definitely watch before The Devil’s Rejects!

Plot: “A washed-up luchador and a super-spy investigate Nazi zombies, a nefarious scientist, and a stripper with a Satanic birthmark.” This animated film is definitely worth the watch, It seems to be the movie that no one watches. Is it because it’s animated? If you haven’t seen it I’m sure you can take 77 mins out of your such busy schedule to watch it.

Plot: “Five carnival workers are kidnapped and held hostage in an abandoned, Hell-like compound where they are forced to participate in a violent game, the goal of which is to survive twelve hours against a gang of sadistic clowns.” This is really one of my favorites. Although there seems to be alot of hate coming from fans on this movie I thought it was great. If you’re complaining about a German midget speaking Spanish shut up and enjoy the movie. If the ending bothers you I can understand that but it leaves your imagination open as well as a potential sequel. This is jusy my opinion though. I ain’t no fuckin clown.

Plot: “Laurie Strode struggles to come to terms with her brother Michael’s deadly return to Haddonfield, Illinois; meanwhile, Michael prepares for another reunion with his sister.” I don’t dislike this movie. I like it, I really do. But there’s quite a few things that bother me in this. Such as Michael seeing his dead mother with a white horse.

Plot: “Heidi, a radio DJ, is sent a box containing a record – a “gift from the Lords”. The sounds within the grooves trigger flashbacks of her town’s violent past. Is Heidi going mad, or are the Lords back to take revenge on Salem, Massachusetts?” This one had people going crazy. I have yet to speak to someone that enjoyed it. I love Rob Zombie, His music and his films. But this film had so much potential that I feel he wasted. The plot and story was there, He just didn’t nail it on the head like he could’ve. I’m actually gonna go watch this again to see if it will grow on me.

Thank you for reading. How would you rate his movies from top to bottom? Comment below.